Described as an “Erliche (honest/straightforward) Yid” by Harav Shmuel Kaminetzky and a “Poshiter (simple) Yid” by one of his album titles, Lipa Shmeltzer is perhaps best described as a Chassidic “Renaissance Man”- a Charedi/Heimish “triple threat” (Lyricist, Composer, Performer) talent with an electrifying yet engaging performance style. Much like the legendary 2nd Avenue Theatre connected with Yiddish speaking Jews of NY during the early part of the 20th century, Lipa’s unique Yiddish “mashup” style resonates with today’s “Yiddishists” on a level that’s every bit as impressive.

Though he’s a native of the Chassidic enclave of Skver in upstate NY (he presently resides in the neighboring community of Airmont), Lipa the performer is a true “citizen of the world”.

Aside from appearances throughout North and South America, his performance itinerary has included stops throughout Europe, the former Soviet Union, the Far East and of course, Israel. While rumors of Dubai have never been confirmed, the fact that people don’t find them to be outlandish is a statement in itself.

Then again, considering that he was one of the first performers to recognize, embrace and harness the power of YouTube and other online media entities—all on his terms, the fact that his following would extend beyond the “norm” should be anything but a surprise. For example, Lipa’s “Abi Mileibt which was inspired by the “Lion Sleeps Tonight” and adapted for HASC in conjunction with visionary producer (and early Lipa fan) Sheya Mendlowitz, was the first “Heimish” viral music hit. It also made him the first Jewish Music performer to prove that with the right vision the right talent could in fact benefit from the vast reach of “new media”.

Speaking of vision, Lipa has begun to extend his ‘brand’ beyond his 11 album discography. Thanks to projects like his highly popular “Hagadah” and some others still in his development pipeline, the Lipa “machine” has become a 24/6 entertainment juggernaut.

His talents have also expanded his fan base to include Jewish music lovers from all walks of life, and in the process, has garnered the attention of the more secular Jewish ‘cognoscenti’ as well. Case in point, in 2008 he joined “crossover” names like Jon Stewart, Ram Emanuel, Adam Sandler, Joseph Leiberman, Ruth Bader Ginsberg and others as one of the “Forward 50”– a list which celebrates “leadership, creativity and impact” and is compiled by the decidedly non-Chassidic Jewish Forward.

Despite a performance style which is synonymous with the cutting edge of and otherwise safe/staid genre, the real Lipa Shmeltzer still stays true to his roots. When his “Big Event” benefit concert was banned by some leading rabbis, Shmeltzer chose to honor the edict even though it was hardly unanimous and generated a strong counter protest which could have easily resurrected the almost sold-out event had Lipa (and Sheya Mendlowitz, The Event’s producer) chosen to do so.

But he didn’t. Why? Because while Lipa the superstar performer is a force of nature who can sell out shows all over the world, Lipa the “Poshiter Yid” is a simple Jew with an unwavering commitment to tradition that’s every bit as powerful as his stage precense.

It’s a commitment that ensures he’ll accept everything life throws at him “Nor B’Simcha” (Only with Joy). 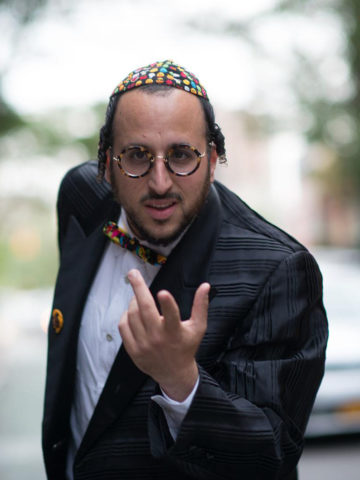 95. The Language Of Music – שפת המוזיקה

111. When Moshiach Will Come