If Shlomo Carlebach was the “Father of Jewish Music” then Abie Rotenberg is its “Poet Laureate” & then some.

A Queens, NY native who presently resides in Toronto, Abie’s contributions to Jewish Music transcend mere “songs” and are in fact better described as “brands”—as in D’veykus, Journeys, etc— names that have become iconic because they have withstood the tests of time and the often fickle tastes of consumers.

Think about it. Back in the 70’s while most of the Jewish music world was discovering that the quickest way to sure fire stardom came from releasing high energy, “heavy on the horns” danceable simcha songs like Shmelkies Nigun, Ki Lo Yitosh, Ko Omar, Od Yishoma, etc, Abie flew in the face of convention and released “D’veykus”…his first solo project—and a musical counterpoint to Jewish Music production “wisdom”.

Actually, D’veykus probably qualifies as the first “produced” album in Jewish music. That’s “produced” as in all songs sharing a single vision and all other elements (from orchestrations to art direction) enhancing that vision to result in well…D’Veykus. While D’Veykus was Abie’s first foray into “triple threat territory” as in composing, performing (vocals and piano) & producing, it wasn’t his “debut”. That happened a few years earlier thanks to a former City Councilman , Judge Noach Dear.

You see, Noach was the founder/leader of a band called Clei Zemer and was working on an album so he turned to a young Abie Rotenberg who contributed a number of tunes—most notably the powerfully, upbeat “Ki Lecho”. Regardless if you enjoyed the original Pete Sokolow arrangement or the Yisroel Lamm version on JEP 2, the highly memorable melody became an instant hit and one of the most popular camp color war songs of that summer. It also set the stage for Abie to …“Do it his way”…and develop the D’Veykus “DNA”…go for the heart…and the head. Does it work? Pick up any D’veykus album and compare it any other albums from that era (Shlomo aside), which album has more songs you know?

While most composers would be thrilled to be associated with even one project of the stature and staying power of D’veykus, Abie isn’t most composers. Which is why Journeys isn’t like most albums. Legend has it that Journeys is Abie’s “ode to the music of Megama—the duo which gave us classics like “My Zeide”. Abie felt that he, too, could write thought-provoking lyrics. “The melodies or the words were never the hard part …it has always been the theme or the message and the way to convey it that is most challenging.”

While Journey’s may have been inspired by Megama, the song, subjects and storytelling style that Abie “brought to the table” enabled it to eventually surpass it on the popularity meter (though My Zaidy will always be My Zaidy) Journey’s lyrics are a bit more ‘intellectual” and insightful. Songs like “The Place Where I Belong” say as much about the composer’s mind as it does about well meaning groups who view Judaism as a “spectator sport” where Torahs become “ancient” artifacts that are “best seen not used”.

And for those of you who think Abie’s all about deep and dark, listen to “The Atheist Convention”, which is Abie’s ‘whim-sightful’ (whimsical yet insightful) tribute to the adage “there are no atheists in foxholes” –or planes for that matter

Abie doesn’t just write songs, he writes anthems–like “Who Am I” which Sheya Mendlowitz (HASC’s “Founder” and producer) “commissioned” . This plaintive tune connected with audiences and drove the HASC message home …all courtesy of a Queens native who despite his stellar talent, is so unassuming that it’s easy to think “he’s just like you”.

NOTE: Doing justice to Abie’s entire career and discography would take a year (at least)…not a month. We apologize for any omissions (though due to space constraints they were inevitable). Most important, we apologize to Abie, who seems almost as annoyed by the “spotlight of fame” as he is by composers & performers who never let “Pirush Hamilos” get in the way of a good tune. Thanks to Yossi Zweig of JewishInsights.com/The Z Report, Lenny Solomon and Google for providing some of the reference material 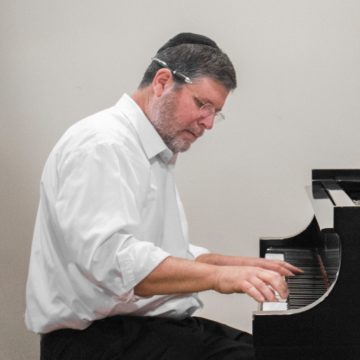 1. A Small Piece Of Heaven