JM fans who were around in the 70’s undoubtedly remember a watershed event called “The American Israeli Chassidic Song Festival.” Inspired by its Israeli counterpart, the AICSF was a competition that pitted tried and true performers from all walks of JM life like R’ Shlomo, The Ruach Revival and Shlomo Haviv against newcomers like the Kochavim and even a new choral act with the oddly memorable name “Amudai Shaish.” More than a memorable name, the group was apparently memorable as well, because they came in first beating out R’ Shlomo, Avshalom Katz (father of Eitan), Shelly Lang and others with the performance of a song called “Boruch Haboh.”

Using this win as a springboard, the song’s composer and group’s choirmaster—Shmuel Borger, together with his co-choirmaster and producer Avrohom Sherman, went immediately to work on a full-fledged debut album—which was unique in more ways than one.

First, in a departure for the era, numerous arrangers were used rather than assigning all the arrangements to a single person. About the only arranger who didn’t join Suki Berry, Heshy Lebovitz and Marty Lewinter on the project was Yisroel Lamm. That was rectified with Volume 2—as Lamm handled all arranging duties for Jewish Music’s first ever double album… and the first JM album to blatantly (some would say brilliantly) borrow from secular sources like Rocky, Grease and Star Wars.

Second, the album launched to a built-in fan base (not just the choir’s family). Borger and Sherman may not have invented “color war marketing,” but they elevated it to an art-like level by making sure songs such as Ani Maamin, Av Harachamim, Endless Years, Baruch Hagever and others weren’t just played ‘round the clock at Camp Na’arim (their summer base) but also were part of the playlist in camps everywhere—thanks to their network of fellow counselors, division heads and night activity directors. The result was a run on the album that brought to mind the “London Meets NY” album release of almost a decade earlier.

Third, to make sure it cut through the jungle of JM album releases, the album cover featured someone in a gorilla suit together with the requisite choir shot. Clearly this was one group that didn’t monkey around when it came to promotion.

Aside from the strong sales which begat stronger sell-out concerts, Amudai Shaish (as a brand) became the musical incubator that gave us the debuts of Avraham Fried, Shloime Dachs, Mendy Wald and Srully Williger—this, in addition to Meir Sherman, Schwebel and Scharf (sans Levine) and others.

Ultimately, the same period sounds that made Amudai Shaish famous, caused fans to look for fresher (or more timeless) performers and choirs. Hence, one single, three double and one wedding album* later, the group that got its name when Sherman’s father realized there were six founding members, ended its highly successful run after 7 well received albums.

As is the case with many period acts, Amudai Shaish faded into that rarefied musical space where their name always brings a smile and a song to mind. Borger leveraged his experience with the choir, music, staging and production to enter what was then the fledgling world of organizational and corporate video production. He traveled the world producing some very moving pieces for some very noteworthy mosdos, not one of which featured a gorilla. Today, the world over is talking about Tears for Moshiach, a magnificent Shmuel Borger blockbuster video presentation which has touched the hearts of hundreds of thousands of Jews. Tears for Moshiach is a must see production that will leave all viewers in total amazement. 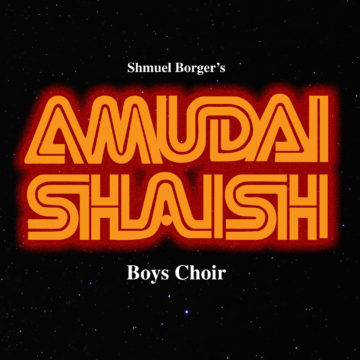