Before Green’s Shlomo infused soul and Glantz’s Latin/Worldmusic- inspired sound…there was a “Yehuda” of a decidedly different style (and demographic background).

This Yehudah! burst onto the JM scene while still a teenager (just barely a teenager in fact), yet with a musical prowess and performance style that was honed well before his teens, thanks to the years he spend “fronting” at simchas for his bandleader father –and entertaining crowds throughout his hometown of Cleveland …and after a while, the rest of the country as well.

As fans will readily confirm, the “!” at the end of his name isn’t a gimmick —if anything, it’s an understatement. When he came to the attention of Zale Newman—a popular JM impresario and one of the “Founding Fathers” of Uncle Moishy, Zale realized that talent-wise, Yehuda! was years ahead of his actual age, and made the wise decision to let the budding superstar retain most all creative control –even in terms of song selection and arrangement. His debut album which was essentially self-produced (during a time when the concept of a “home studio” was still in its infancy) , gave us Yehuda’s unique stylistic spin on Martin Davidson’s classic Modim—a “spin” that put both song and artist at the forefront of the “Simcha Dance” phenomenon. Modim was soon followed by other classics like “Dovid Melech,” “Yesh Sachar,” and Eftach Pi B’Shira.”

Unlike other performers who are almost exclusively products of the studio and, hence, are unable to recreate the “magic” of their recordings for live performances, Yehuda’s live shows were legendary in their own right. Leaving nothing to chance, he created (with the help of his brother and father) a computer controlled “tour package,” which included music, sound, lights and everything else needed to turn any venue into a memorable sight and sound driven experience –complete with rear projection video and Yehuda! rollerblading in perfect time to the music.

While his music matured to keep with the times –and in the process, showed us the DNA he shared with his grandfathers—who were well regarded “Menagnim” for Klausenberg and Vishnitz—the excitement and energy that defined his performances never changed. On the contrary, Yehuda’s shows were always showcases for the latest and greatest “performance tech”—none of which ever came close to ‘overshadowing” the performer himself.

With the exception of private events and some annually anticipated Pesach appearances, Yehuda’s career is now more studio based, though rumor has it he’s putting the finishing touches on a new album that will enable a whole new generation of JM fans to understand why nobody put the “!” in Yehuda like he did. 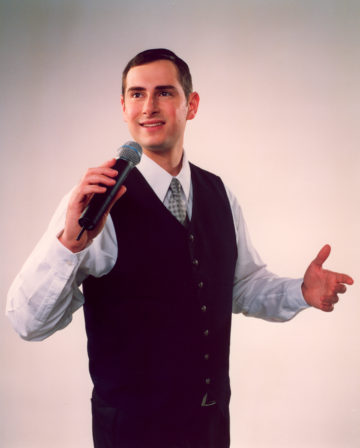