As the famous Vincent Van Gogh once said, “The person born with a talent they are meant to use will find their greatest happiness in using it.” Known for his stellar hits, beautiful voice,
magnificent orchestra, and incredible chesed, Shloime Dachs is certainly very talented and brings much happiness to his listeners. He puts smiles on faces, from across the spectrum, both
young to old.

Shloime began his singing career as a younger man at the tender age of 6. He was a member of multiple choirs including the famed Tzlil V’Zemer, Amudai Shaish, and Miami Boys Choir. His stand out solos led to much recognition and eventually led Shloime to his guest appearances on numerous collaboration albums such as Sameach at the Wheel, Yerachmiel Begun’s Yachad, Gideon Levine’s Best of the Best, Dance with Neginah 4 & 5, Lev V’nefesh, Solid Gold, and Kol Zimrah.

The Jewish Music scene exploded with the announcement of One Day At A Time, Shloime’s debut album produced by Yochi Briskman, 18 years ago. To this day it remains one of the fastest selling Jewish records of all time! It included classic hits such as “Hamalach,” “Yerav,” and “Chamol.” Shloime’s magical voice has enthralled audiences around the world, both in concerts and at numerous chassunas. He even performed on the biggest stages in the country such as Lincoln Center, Nassau Coliseum, Manhattan Center, Metropolitan Opera House, and Madison Square Gardens. Shloime sang alongside headliners like Avraham Fried, MBD, and Dedi on stage. On top of all this, he has also had the privilege of headlining the Victroy Rally in Brooklyn for Mayor Michael Bloomberg. And he has been an annual performer at the Israeli Day Concert in Central Park. On a more personal note, since Shloime is actively involved in Ohel, he performs with pleasure, at their various functions, throughout the year.

Shloime’s second brilliant album Acheinu was released in 1998, and featured the compositions of Yossi Green. His follow up release, K’ish Echod, sold at a record breaking pace, over 25,000 copies, in the US alone.

Pushing new boundaries with his fourth studio album Avinu, Shloime released 11 hit tracks composed and arranged by Yitzy Bald, along with an unprecedented six minute music video for his “Im Eshkochaich,” an interactive tour of Israel. His latest release, Hashem Echod, produced by Gideon Levine, was Dachs’ most unique album to date. Shloime describes it as “A truly inspiring and invigorating production,” since it incorporated various styles, from five different composers, and four elite arrangers, very atypical for Shloime. For many the highlight of the album was “Yigdal,” an upbeat Mizrachi style song featuring Chaim Yisrael.

Due to the overwhelming success and response he has received from singing at various Simchos, Shloime decided it was time to create his own wedding band. In 2004, he launched the Shloime Dachs Orchestra. Since its inception, the Shloime Dachs Orchestra has performed at thousands of Weddings, Bar/Bat Mitzvahs, Dinners, and Concerts throughout the tri-state area. The band released Dance All Night in 2008, and it currently remains one of the greatest wedding albums of all time, containing outstanding dance sets.

Shloime Dachs’ golden voice and immense musical creativity truly sets him apart from the rest. He always has his finger on a new project and only time will tell what is in store for the future! 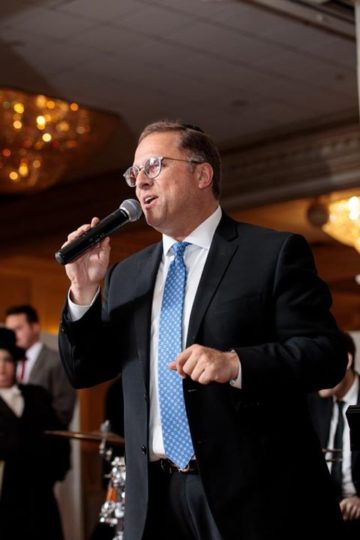