Ask any Jewish Music maven who is responsible for proving the electric guitar has a place at Jewish Simchos and odds are they’ll say Yossi Piamenta. Ask the same person who did the same for Chassidic singers—or perhaps “Simcha singers” in general, odds are you’ll get a range of names which may include everyone from Daskal to Lipa to Weber, Falkowitz and perhaps even “blasts from the past” like Yossi Rosenberg and Ira Heller.

Though if the person you’re asking is a bona-fide maven, odds are he’ll pause for nary a second before responding “Michoel Schnitzler”.

Why? Because more than most anyone else Schnitzler has used his high energy ultra effervescent style to “mainstream” the concept of “heimish”/Chassidic simcha singer to the point where it’s part of virtually every kind of Simcha, from Black Hat to Black Tie.

You see, Schnitzler isn’t a performer as much as he’s a Ba’al Menagen—a singer who understands the power of a nigun and how to “deliver” it so that it transcends even the largest band to connect with the audience in a way no instrument or orchestra can. His natural ebullience isn’t staged or rehearsed, it is every bit as spontaneous as the dancing and overall energy of the room. In fact,—and as anyone who has ever experienced ‘Schnitzler Live” will attest to, the relationship between him and his audience is almost symbiotic—they “feed” off each other, pushing the level of “simcha” beyond any point the guests could have ever imagined before the event began.

While his career spans over a quarter of a century, Schnitzler first received “crossover consciousness” in 1996 with the release of his “Simchas Beis Hashoeiva” album. Unlike most “studio simcha” projects, this album flawlessly recreates the live dynamic of a Simchas Bais Hashoeiva in every sense of the word.

Together with members of Neshoma Orchestra (all of whom are in their usual top form) Schnitzler cuts loose with an array of medleys that run the gamut in terms of styles and tempos.

While Schnitzler’s extensive discography seems to be dominated by “Simcha-themed” albums, he is equally well regarded for his “original material” projects—all of which are performed with every bit as much raw emotion as his simcha albums. Case in point, his recent “Mein Kihnd Tref Mich” (My Child Meet Me). Despite the fact it’s all in Yiddish the album was an immediate best seller thanks in part to “Der Bochur’s Tzavva” (The Boy’s [final] Request) Which describes Schnitzler’s interaction with an “At Risk” youth, how the youth became a fixture in the Schnitzler home and how when he was diagnosed with a terminal illness, he asked Michoel to record a song that would serve to open society’s eyes to issues and situations that are sometimes partially responsible for “At Risk” youth. A challenging undertaking by any performer—but one more proof positive that Shnitzler is not just any performer.

…He’s a game changer and the next time you’re at an event and find yourself listening to Lipa, Daskal, Werdyger, Weber, Falkovitch or whoever was hired to keep the simcha going…don’t forget to stop for a second and say thanks…to Michoel for making it all happen. 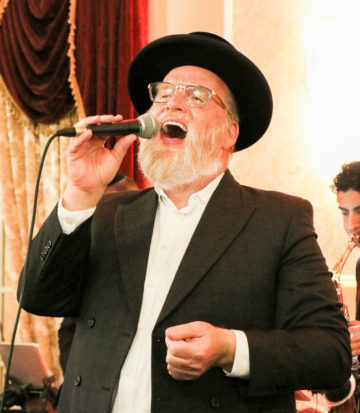