ZUSHA is a Hasidic/Soul/Folk band seeking to inspire the world through their original music, combining ancient tradition with modern melody.

Shlomo Gaisin (lead vocals, ukulele) and Zachariah “juke” Goldschmiedt (guitar, backup vocals), have traveled the world with the messages of torah and unity, playing to sold out audiences around the globe including New York, California, Jerusalem, Toronto, Russia, London and Australia.

Zusha’s next album, A Colorful World, will be available September 4th wherever music is sold. The album was recorded over the span of 2017 with the tremendous help from Jon Seale, of Mason Jar Music. With Hashem’s help, Zusha will be going on a World Tour September-November. Stay tuned for a performance near you.

After being introduced by a mutual friend in the East Village of New York City, the group instantly became friends and jamming buddies. They would often spend Shabbat together at the Chabad on Bowery, singing and writing melodies that pierced the heavens. Zusha became a natural extension of this friendship, and it continues to be a fundamental energy in their music. The Zusha motto is, friends first, business last.

Almost 3 years later, and Zusha are still finding ways to create and innovate. Most importantly though, they are continuing on their mission to bring light to the world through music, smiles, positive actions. 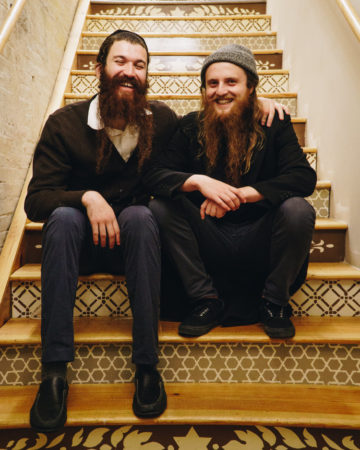