Moishe Oysher (Yiddish: משה אוישר, (born 1906 in Lipkon (Lipcani), Bessarabia, Imperial Russia – died 27 November 1958, New Rochelle, New York)[1] was an American cantor and Yiddish theatre actor. He is considered[by whom?] one of the most entertaining chazanim (cantors) ever recorded.

Oysher was born to a Jewish family that traced six generations of chazanim. He told writer Khaver-Paver that his grandfather sang folk songs and workers’ songs to his students when Moyshe was young, and the heartfelt tunes were in my blood, and that it was from his other grandfather “Yosl der poylisher” and his father “Zelik der poylisher” that he inherited his gift as a khasn (chazan).
Childhood

His father departed for America when Moyshe was young, leaving him with his grandfather. He started acting in school and played a few roles in the poet Eliezer Steinberg’s Der Berditchever rov. He named Steinberg as a profound influence on his life.[1]

In 1921, he traveled to Canada to join his father. On the way, his voice broke, so in Canada he worked at first as a dishwasher and later a launderer to support himself.
Career

He finally got his voice back and began singing again, in literary and dramatic clubs. He met actor Wolf Shumsky and traveled with him to Winnipeg, where he played Yiddish theater for three seasons. He was allowed into the Canadian Actors’ Union in 1924 and played in the Montreal Yiddish theater under the direction of Isidore Holender. In 1928 he was on Yiddish radio in Philadelphia, where his parents had moved, and that same year he was engaged at the Hopkins Theater in Brooklyn, then in Newark with his wife Florence Weiss and then the Lyric Theater. In 1931 he was accepted into the New York Actors’ Union and played in Anshel Shor group, then played with Boris Thomashevsky, then in 1932, he started his own company and traveled to Buenos Aires and across Argentina, Uruguay, and Brazil.[1]

Returning to America, he worked on the radio and starred with his wife in the Harry Kalmanovitsh – Joseph Rumshinsky operetta Dos heyst gelibt (This is what’s called being loved). Around the same time, with the encouragement of friends he applied to conduct services as chazan for the High Holidays at the First Roumanian-American congregation, in Manhattan, New York, on the Lower East Side and caused a sensation,[2] being perhaps the first singer to step from ‘the bine’ (stage) to ‘the bimah’ (pulpit). He would thereafter work around the world in both arenas.[1]

Some say that Oysher’s voice was like the “roaring of the lion.” He liked the jazz style, popular at that time, and he used similar rhythmic melodies in his prayers, respecting always the traditional Bessarabian “Doinas” and “Nussach” moods of the prayers.

Oysher starred in three Yiddish films. In 1943 Oysher signed a contract with Fortune Gallo to perform several roles with the Chicago Opera Company and a fine career was foreseen, but after a heart attack he had to abandon the idea; he continued to work in radio and as a khazn and recording artist until, after other heart attacks, on the advice of his doctors, he entered semi-retirement.
Descendants

He died in New Rochelle in 1958, survived by his second wife Theodora (a pianist who had often accompanied him in concert), their daughter Shoshana (Rozanna), his sister Fraydele (a Yiddish theater actress and singer) and her husband Harold Sternberg, a chorister in the Metropolitan opera.[1] Rozanna married Armond Lebowitz and they had two sons, David and Brad. His niece is recording artist Marilyn Michaels.
Filmography

Directed by Ilya Motyleff and Sidney Goldin. Other actors: Judith Abarbanel and Florence Weiss. Based on Moishe Oysher’s life. A very poor young immigrant lands a job as a custodian, where he is “discovered” and becomes famous immediately. However, his success seems meaningless as he yearns for home.

Directed by Edgar G. Ulmer. Also with Miriam Riselle and Florence Weiss. This is a classic story of a blacksmith that is a womanizer and almost an alcoholic. One day, he meets a beautiful lady called Tamare and his life changes.

Directed by Max Nosseck. Helen Beverly and Florence Weiss. Oysher is the “Vilner Balabesl” – a cantor in Vilnius – with a renowned voice. Two men come from the Warsaw Opera to hear him sing the “Kol Nidre” on Yom Kippur and are so impressed that they introduce him to European classical music and to reading sheet music; they convince him, against the wishes of much of his family (and especially his father-in-law) to become an opera singer in Warsaw. He leaves his job as the Vilnius cantor, and seems at first to be on the path to fame and fortune as an opera star in Warsaw, when the news arrives that his son has died. Grief-stricken, he stumbles over the aria he is supposed to sing, starting instead into a lullaby he used to sing to his son. In disgrace, he also loses his voice; he tries to return to his life in Vilna; finally, his voice comes briefly back to him on Yom Kippur. He sings the first few lines of the “Kol Nidre”, then dies of a heart attack.

In the 1944 movie Song of Russia, using the pseudonym Walter Lawrence, Moyshe Oysher sang “Rusland iz ir nomen” (“Russia is Her Name”), music by Jerome Kern.
Singing in the Dark, 1956, USA, B&W, English. A motion picture about a Holocaust survivor suffering from total amnesia who comes to the United States and becomes a singer. Oysher sings in English and in Hebrew. 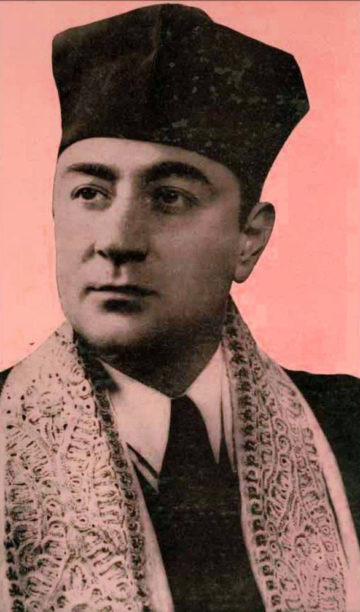