You don’t have to be a musicologist to realize that there’s more than meets the eye to a trio of Breslover Chassidim with a repertoire that includes Chabad and Satmar standards as well as Yiddish folk tunes (complete with a bluegrass and/or flamenco flair) . Add to that personal stories as eye opening as their performances and personalities as refreshing as their music and you have all the “ingredients” needed for Simply Tsfat. So, with apologies in advance for the excessive alliteration, let’s meet this terrifically talented trio of troubadours.

Yonatan Tzarum–the group’s “Sabra,” learnt flamenco guitar from his father. Rather than stick with it, he instead chose to play basketball and football with neighborhood friends. As he was missing baskets as well as music, he went back to his instrument with a renewed dedication and soon became the bass player for a Japan-based heavy metal band. Then, during a visit to Israel, he “found” what he was really looking for and traded in his bass for a Bekisher and his partying lifestyle for peyos.

While Yonatan identifies with the Simply Tsfat “sound,” he does acknowledge that musically the world is a big place. “They say since the time the Beit Hamikdash was destroyed, along with all the music of the Leviim, everything dispersed and fell down for all the world. This is why we sometimes feel emotion when hearing something secular–because within that “nonsense,” are some strands of what our souls “recognize” as real music.”

Yehonasan “Yoni” Lipshultz–the group’s American born violinist, shares a similar story (minus the Japanese heavy metal band and some other elements). A well regarded violinist who was playing since age seven, while also studying with some of the most prestigious names on the planet, Yoni (with his wife’s blessing) chose Yiddishkeit over “fiddlekeit” and sold his violin to finance a down payment on a home in a Jewish neighborhood. A sefer by Rabbi Nachman of Breslov became his “go to” and was the impetus behind him making Aliya. Two weeks after his arrival, the Gulf War began.

While he no longer had his “instrument” he still had his “music” — only now Breslov & Modzitz replaced Beethoven & Mozart. Lipshultz became enthralled by the Shabbat songs sung in the local Breslov synagogue in Tsfat. Feeling the music led to a desire to perform it–a desire that was finally realized while in Uman where for $10 he bought a violin from a street peddler. “We don’t always get the answers we want, when we want them, but talking to G-d works,” recounts Yoni with a smile.

Rounding out the trio is Eliyahu Reiter, the group’s guitarist and ipso facto “spokesman/storyteller.” Academically, Eliyahu graduated from Tufts and Stanford (where he received a Masters). Personally he graduated to the kind of intelligently insightful lifestyle that is synonymous with Tsfat. The result? A warm, balanced musicality that fits perfectly with Yonatan’s soaring guitar work and Yoni’s violin mastery. In terms of how these three very unique individuals actually got together, let’s just say few places beat the mystical magical Tsfat when it comes to “Bringing out the Bashert.” As I’m already dangerously close to overstaying my literary welcome, I’ll just end this by recommending an easy way to appreciate the refreshingly delicious music of Simply Tsfat:

1) Check out the names of their albums– Fresh Air, Never Give Up, Be Happy, Souls In Harmony, You The Best (Live Album) & New Beginnings

2) Listen to them from start to finish and try not to be impressed by how well each one conveys the title sentiment –and way, way more.

Speaking of appreciation, no even mildly accurate Simply Tsfat bio would be complete without a reference to Izzy Taubenfeld a’h of Sameach Music. Why?  For all he did-which he did for the same reason he always did all he did — because he believed. When Izzy believed in you, he–along with his brother Benny, didn’t just make sure you knew it, they made sure everyone knew it. While there were folks behind the scenes and more than a fair amount of Hashgacha Protis that got the initial ball rolling, it was Izzy’s & Benny’s precision engineered Sameach “machine” that got them on the shelves–and into the homes, hearts and souls of the JM audience . Legend has it that all it took was Izzy hearing the first cut of their demo then asking “Where do I find these guys?” Once he found them, he made sure everyone did as well.

Is there more to Simply Tsfat’s back-story? Yes there is, though due to issues of time, space and this writer’s legendary inability to communicate succinctly, you’re invited to visit www.thejewishinsights.com, where you’ll discover how Simply Tsfat got “discovered” in the dark ages before social media, YouTube and all the other stuff that makes “making it” in 2017 a bit less challenging than it used to be a mere 15 or so years ago–when all you needed was actual talent—a father who believed in you…and the power of the US Post Office. 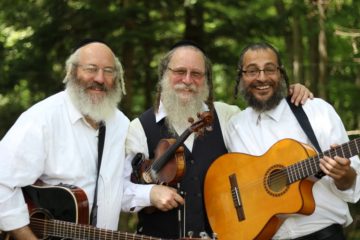