Until the age of 8 Roy lived in the city of Kiryat Malachi and later the family moved to the city of Rishon LeZion where Roi spent most of his childhood and youth.

Already in kindergarten, his parents discovered a strong attraction to music, while in elementary school he was the school’s “singer” and also the main actor in the school’s planned plays.

The first time Roi came bravely to the stage as a singer and not as part of the school was at a bar mitzvah party of one of his friends when the bar mitzvah came.
His appearance was greeted with such a wave of compliments, and Roi realized that this was one of his greatest goals in the world – to sing, to feel and to be happy.

In middle school, he studied at a preparatory yeshiva in Givat Shmuel, and in high school he studied at the Kfar Haroeh Yeshiva, founded and founded by Rabbi M. Tzeraria zt “l.

At the age of 15 Roy began to perform at small events such as Bar / Bat Mitzvahs, alliances, engagement parties, etc. When he was accompanied by keys he joined the yeshiva. But his exposure to the world of music Roy received during his army service.

After completing his studies at the yeshiva, Roy joined the army and served as part of the “Military Rabbinate” under the direction of Moshe (Mona) Rosenblum.
In the middle of the service he became commander of the band.

During the army he accumulated a lot of stage experience and even got very close to Mona Rosenblum, where he was exposed for the first time to Hasidic music.

In the middle of his military service, Roy joined the successful wedding ensemble “Envi Hagefen” and since then he has been the soloist.

Toward the end of his military service Roi married Efrat and he received six children – Elissar, Ronel, Elran, Yarin, Hillel and Shiria.

After completing his military service, Roee studied for four years at the Givat Washington College of Education.

In 2003, Roi participated in the second album of the Envi Hagefen orchestra as befits the orchestra’s soloist and performed duets with some of the greatest Hasidic singers such as Dedi Groucher, Yishai Lapidot, Uri Shevach and more. The CD was successfully received and established Roi’s status as a chassidic singer.

Immediately thereafter, Roi felt that he had not yet spoken his unique musical way, and therefore he produced a single single as a singer in his own right called “Creation of the World”, in which he shows his unique style, since he composed the song together with a friend for the yeshiva and for music.
The song was received with great excitement and sympathy and showed the audience Roi’s rich repertoire as both a Hassidic and Israeli singer.

In 2006, after the painful disengagement from Gush Katif, Roi received a text for a song about the expulsion and the aspiration for a complete Israel. The song was called ‘The Land of Israel’ by Tamar Sharvit-Assnafi and composed by Roi himself. The song was arranged by the talented pianist and pianist Eldad Ratzon (who studied with Roi in the yeshiva and even served with him in the military band). The song became Roy’s biggest hit and broke all the conventions in the religious media as the most sought after radio programs and took all the charts and became the ringtone most wanted among listeners. The song has become a real anthem in all the kindergartens, elementary schools, yeshivas, ulpanot and seminaries, branches of the various youth movements and the way it has been since then, and this song has established Roi’s status as a singer and more than the first in the Jewish music scene.

In 2007, Roi finally released his debut album, while at the same time the Invei Hagefen Orchestra released a third disc together with Roy. Both discs were a huge success and sold tens of thousands of copies.

In 2010, after three years of harvesting the fruit from the debut album, Roy Yedid’s single came to the musical producer Nadav Biton (Amir Benayoun, Shlomi Shabat, Yishai Levi, Margol, Harel Moyal, Yossi Azulay and others). After Nadav heard the song, he decided that Roi’s voice must be heard and it was unfair to leave it to only one public.

Nadav helped Roi connect with his Yemenite sources and roots and integrate them into Israeli poetry after a long period of Hasidic poetry, so that in a project about which he worked for two years, when Nadav Biton and Noam Khayat produced him, music was created with a fragrance that was unparalleled in Israel.
A rare combination of a beautiful voice and touches with special songs that will do something to any person, secular or religious, seasoned with touches of world music.

This disc brought Roi to conquer more peaks since Roi was first heard well in the general media such as: Galatz, network G, radio heart of the state, Radius 100 fm and more, and even sang “generous” from the album won a dance for a people that very successful Thus Roy was exposed to a broader spectrum of religious and secular audiences alike.

Roy is currently working on his third album.

You are welcome to catch up on new shows, songs and watch the special videos that go up to the Facebook page only and share with viewers the way of musical activity of Roi Yedid. 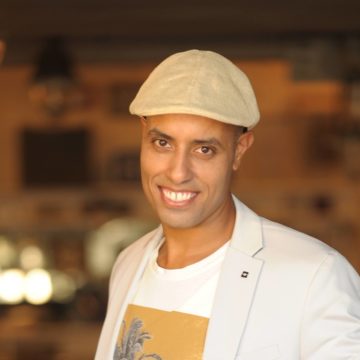