Rabbi Moshe Shur was born in New England towards the end of the Second World War. His childhood was spent in Detroit, Michigan. In 1966, Rabbi Shur completed a joint degree in history and Hebrew Letters from Columbia University and the Jewish Theological Seminary, respectively. It was during his time as a student at Columbia University that Rabbi Shur spent two summers as a member of the Summer Community Organization and Political Education (SCOPE) program in Orangeburg, South Carolina. The (SCOPE) Project was an initiative of the Southern Christian Leadership Conference (SCLC), directed by Hosea Williams under the leadership of Dr. Martin Luther King, Jr. There was a call for northern students to participate in the civil rights activities in the south. Often at risk of arrest and/or violence, SCOPE volunteers collaborated with local individuals and groups to lead voter registration drives, hold information sessions, and assist with other community organization efforts.

Under the advisement of history Professor James Shenton, Shur traveled to South Carolina in the summer of 1965 as the chairman of the group from Columbia. Prior to beginning work with SCOPE, Shur went to Atlanta for an orientation where he had the once-in-a lifetime opportunity to meet significant Civil Rights Movement Leaders such as Dr. Martin Luther King, Bayard Rustin, Hosea Williams and Andrew Young.

During his two consecutive summers in the South in 1965 and 1966, Rabbi Shur had many significant and unnerving experiences including witnessing the aftermath of the burning down of a church, sneaking into a Ku Klux Klan meeting, participating in a courthouse demonstration and being threatened by policemen in South Carolina. The majority of the time Shur spent registering voters, however, and in developing a deep spiritual connection to the work being done. Newspaper clippings collected by Shur’s parents during his time in Orangeburg comprise a significant part of the collection.

Following his summers with SCOPE, Rabbi Shur went on to receive a Juris Doctorate (J.D.) from Wayne State University and a Master’s Degree (M.A.) in Near Eastern Studies from the University of Michigan at Ann Arbor. He would then travel west to the Bay area where he taught Hebrew Language; and Jewish Mysticism. It was during this time in California he heard such bands as the Grateful Dead, Santana Jefferson Airplane and Crosby, Stills, Nash and Young, that further developed his love of music that continues to this day.

In 1974, Rabbi Shur traveled to Israel, where he attended the Diaspora Yeshiva Rabbinical School. During his time completing his degree, Shur married and also helped form the Original Diaspora Yeshiva Band. Rabbi Shur returned to the U.S. where he spent two years at the University Virginia and the following 32 at Queens College serving as the Executive Director of Hillel: The foundation for Jewish Campus Life.

Rabbi Shur has recorded several albums, and the latest CD he produced with his sons is called “A Shur Thing.” He continues to perform throughout the US and Israel. Rabbi Shur currently serves as adjunct professor of History at Queens College and is a Senior Associate for the Center for Jewish Studies. 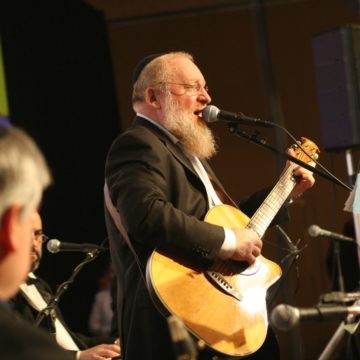