The Original Diaspora Yeshiva Band was formed in 1975 by Avraham Rosenblum, a multi-talented composer, singer and guitarist who led the band through several incarnations over an eight year period. The group took its name from the noble (although at that time a bit wild and wooly) institution in the heart of Jerusalem where its members studied Torah. They were among the first wave of Baalei Teshuva, returnees to Jewish religious practice who somehow managed to survive the 60s and return to the fold.

Whenever the band appeared on stage – whether on a Motza’ei Shabbos overlooking the rooftops of Har Zion, or at big venues such as Israel’s Hasidic Song Festival – the players looked pretty Yeshivish (the funky hat or two being the only giveaways). But when they turned on their amps and cut loose, it wasn’t Cantorial music that came out, but an original decoction of what they called ”Country and Eastern Music”: Tehillim, Bluegrass, Chassidic Niggunim, and Rock’n’roll.

This was not merely a musical novelty produced for fun and profit. It wasn’t even an act of rebellion from the Jewish music of the past (or the extremely deep traditional Jewish music of the present). It was a natural means of expression for young men who, despite all appearances, weren’t Yeshiva Bochurim from Mir or Ponevitch or Tchebin. They were refugees from a secular America that, for all its economic affluence, was perceived to be spiritually bankrupt; and by the grace of the One Above, they had come to Jerusalem in search of spirituality and meaning. Having come of age listening to Dylan and the Beatles, Diaspora used the styles they understood best to express their own nascent feelings of love for Hashem, for the Jewish people, and for the land of Israel.

Just as this music was spiritually uplifting for its creators, so did it have a similar effect upon its listeners. For those who experienced it live on those memorable summer evenings in Jerusalem, it was a joyous infusion of “rock from the Rock.” Diaspora’s records were almost equally potent, serving as the soundtrack for the Baal Teshuva movement even after the band ceased to exist – as if the songs had a life of their own. 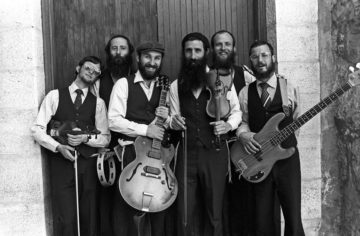