Old City of Jerusalem resident, Chaim Dovid Saracik, has been touching the souls of the Jewish world with his music for over 40 years. Originally from South Africa, Chaim began playing guitar at the tender age of 11. He grew up to serve in the South African military. In the 1970s he spent time in Israel volunteering as a gardener on kibbutz “Ramat Hakovesh.” A spiritual search led him to ashrams in Europe, where he met Rabbi Shlomo Carlebach (z”l) who encouraged him to return to Jerusalem and give Judaism another chance. He has been continuing the legacy of R’ Shlomo’s music and neshama ever since.

Dovid joined the Diaspora Yeshiva in Jerusalem, Israel in 1975 at Reb Shlomo’s behest. It was there that he met the famed Diaspora Yeshiva Band. Chaim ended up performing alongside the DYB for his first few years in Yeshiva as an opening act. He was also featured as a musician on the album Land of the Father. His composition Hiskaber Kari was also featured on the album. In 1982 Chaim got married and moved into the Old City where he continued to play music, write songs and worked as a sofer stam. He released his debut album Ohr Chadash in 1986 and followed it up with Open Up Your Gates which featured some of the DYB members like the famed guitarist, Menachem Herman, and the talented arranger Lieb Yaakov Rigler. In 1993 Reb Shlomo took Dovid to Chevron to accompany him with his keyboardist for a live performance. As Reb Sholomo was getting on in years and his heart wasn’t great, the duo ended up filling in for him more than intended. The songs “Seven Shepards” and “Yamamai” touched the audience to their core, and they wanted more. After that performance Chaim Dovid became one of the most played wedding bands around Israel. The people of Yehuda and Shomron loved him and his music. During his career Chaim performed many times in Sydney and Melbourne, including once on Lag Ba’omer in Sydney, Austraila for hundreds of people. Dovid also toured in South America with Rabbi Richard Kaufman, originally from Uruguay, who does tremendous outreach work. In the last forty years he has also had the pleasure of performing in Miami, Chile, on Argentina rooftops at night, England and Russia. When asked what he thought of Jewish music in 2015 Chaim Dovid answered “Jewish music now is more diverse then it was 30 years ago. There is some really great music coming from the Katz Brothers, Shlomo, Eitan and Yehuda as well as the Razel Brothers.” Dovid still performs at the occasional wedding, however he doesn’t divert to popular music so his crowd is limited. His slight stature, quiet demeanor and gentle voice mask a spirit and fervor that surprises those seeing him for the first time. Yet it is his folksy, deeply moving, and sincere performances which have made him a star in his own right. Chaim Dovid’s songs, whose melodies are masterful and nuanced in rich lyrics, are sung around the world. Anyone who has experienced a concert can attest to the energy that flows from the stage. Every concert touches the soul and warms the heart. 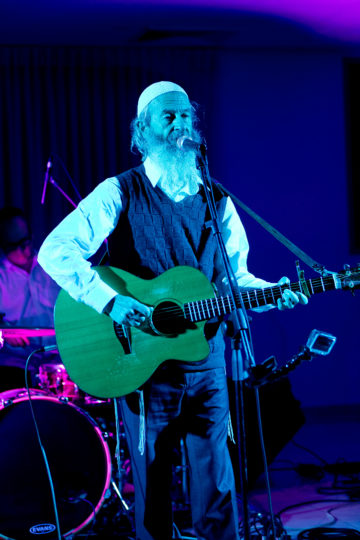