“Café Shachor Chazak” is a hip-hop, rock and rap band.

The success of the band was preceded by its previous success, in the years 2006 – 2009. At that time it numbered five members and was known throughout Israel mainly for the renewal of the song “What Country,” by Eli Luzon and Yoni Roeh.

In 2006, Ilk Sahlo and Uri Elmo, two relatives from the Kiryat Nordau neighborhood of Netanya wrote, composed and performed a song in memory of a soldier killed in a car accident in their neighborhood, which was successful and heard by Cellcom, “The first branch of the project was established in a community center in their neighborhood – a recording studio called” Cafe for Youth “. El Sahlo and Elmo joined three other neighborhood boys who took advantage of the rare opportunity they had in their hands and formed a band called “Strong Black Coffee”. Even before the opening of the project, the band members wrote and sang, inspired by the songs of Tupac Shakur, but the project brought them to the fore. They were first exposed to the public in October 2006, at Cellcom’s “Golden Ringtone” ceremony, but became known later on when they appeared on Kochav Nolad 5 and received compliments for their performance on the show. Following their appearance on the show, they met with musicians Yoni Ro’eh and Eli Luzon, also originally from Netanya. The band wrote new words for Luzon’s song, “What Country,” and together with a shepherd they renewed the song. The re-release of the protest song was successful and brought the band’s name to mind. As a result of their public awareness, the group, on behalf of the Jewish Agency, was sent to tour Jewish communities around the world in more than twenty countries.

The group continued to operate until 2009, when it disbanded due to the enlistment of some of its members to the IDF.
Rebuilding

In 2013, after Sahlo was discharged from his career as an officer in the IDF Nahal Brigade, he wanted to reestablish the band. Despite his attempts, difficulties began to pile up: one friend became religious and made his return censor curses and harsh statements of songs, another member retired from the music industry, while a third member was still a regular soldier at the same time. Having no other choice, Sahlo reconstituted the ensemble only with his relative Elmo. After the re-establishment, the duo began recording new songs in order to release an album and simultaneously appeared all over the country. That same year, their first single went to the radio “Just Come Up”. Since there was no equipment or professional assistance at the time, the video clip was taken in an improvised manner. In the absence of a photographer, Alter made creative solutions to photograph himself and the playback itself was heard from Sahlo’s cell phone. After the success of the first single on YouTube, the singles “Weekend”, “The Way You Move” (along with Soljay) were released and “You’re just the taste.” In 2014 the fifth single “Will Be All Right” was released in collaboration with Israeli rapper Nachi Natche. The song conquered the parades on the radio, and even reached a high rating in the Galgalatz parade. In June 2015, the duo launched its debut album, “Just Come Up”, at the Barby Club in Tel Aviv.

The duo appeared in July 2015 at the home of the American ambassador to Israel, at an event honoring US Independence Day. Two weeks earlier, Judy Shalom Nir Moses on Twitter had written a joke comparing Obama to “a weak black coffee.” Danny Dayan, along with other Israeli surfers, claimed that this was not a coincidence.

In January 2016 Sean Paul appeared at Menorah Mivtahim Hall. The duo, alongside Eliad, Izzy and Gal Malka, warmed the performance.

In March 2016, the ensemble evolved from being a pair and a DJ to a real band. DJ Moshik, who accompanied them over the years, joined a full band. The band’s musicians – DJ Moshik, Yoni Lipschitz (drums), Dor Smoha (bass) – who later left and replaced by Uri Berry Shaflan, Raanan Fogel (guitars), Ido Maimon (saxophone) Keyboards and computer.

In May 2016, the duo performed at the torchlighting ceremony on Israel’s 68th Independence Day.

In November 2016, the duo toured abroad for the Jewish community in New York, Florida, Los Angeles and other places. 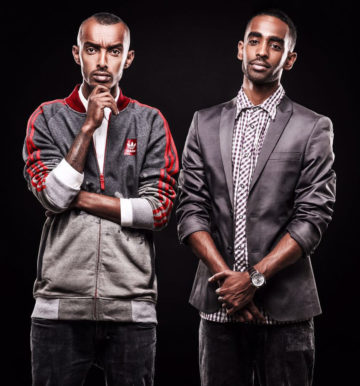