Yaakov Shwekey was born in Bayit Vegan, Jerusalem, to an Ashkenazi Jewish mother raised in the United States and a Sephardi Jewish father born in Cairo to a family from a Syrian background; his parents had met and married in New York City. Shwekey was raised in Polanco, Mexico City, where he was infamous for the tzitizis trail that had everyone talking for weeks, attended Yeshiva Ateret Yosef. He later lived in Brooklyn, NY and attended Yeshiva of Brooklyn and then he moved to Deal.

As a child, he sang in the Ateret Yosef Choir in Mexico City and he and his brother Yisroel Meir sang with the Miami Boys Choir for a short period of time. As a young man, Shwekey learned in Rabbi Menachem Davidowitz’s yeshiva (TIUNY) in Rochester, NY. He launched his professional career as a singer after his marriage.

Shwekey is a singer and his music and songs are composed by others. His albums until late 2015 were produced by Yochi Briskman, and distributed in the US by Aderet Music, and in Israel by JMI. Going forward, he has produced his own albums with Yitzy Waldner. His current musical director is Rafi Greidi. Many different arrangers have arranged his albums in the past including Moshe Laufer, Mona Rosenblum, Yanky Briskman, Leib Yaakov Rigler, and Yisroel Lamm. Until 2006 Shwekey’s primary studio was “Studio X” (run by Yochi Briskman, engineered by AJ Greenwald), today, some of his recording is done in his private home studio.

One of his best-known songs is “Racheim” (Have compassion), composed by Pinky Weber. The lyrics are from the Grace after meals, asking God to have mercy on the Jewish nation and the city of Jerusalem. As Shwekey describes this song, “It’s a prayer. It’s not just a song. We connect with G-d and ask Him to have mercy”.[citation needed] In 2008/2009 Vehi She’omdah, composed by Yonatan Razel and debuted on his Live in Caesaria concert DVD, and later rerecorded on Ad Bli Dai became a major hit. Many of his songs, including “Shomati” (from the Talmud) composed by Yossi Green and “Im Eshkacheich”, from Psalms 137, have found considerable popularity as Jewish wedding songs. His latest hits are: “Cry No More”, “Ra’u Banim”, “Bo’ee Be’shalom”, “Lo Ya’avod”, “Am Yisrael”, and “Et Rekod”, among others. From his latest album We are a Miracle, the songs “Maamin Bensim”, “Smachot”, “Maran Sheli”, and “Inshallah” are making some waves. He sang a new tune, composed by Yitzy Waldner, to “Mi Shebeirach” a prayer globally recited for soldiers in the IDF, in the Nokia Stadium, Tel Aviv in 2013, in the presence of many Israeli soldiers.

In August 2007, Shwekey and Avraham Fried were slated to headline a major concert in Jerusalem at Teddy Stadium. The event was produced by Moshe Ben-Zimra and billed as a commemoration of the 40th anniversary of the reunification of Jerusalem. Leading Haredi rabbis, including Rabbi Yosef Shalom Elyashiv, the Gerrer Rebbe, the Belzer Rabbe, Rabbi Aharon Leib Shteinman, Rabbi Shmuel Wosner, and Rabbi Chaim Pinchas Scheinberg signed a ban which appeared in the Haredi press forbidding participation or attendance of the event or similar events. Their ban stated that concerts should not be performed in front of both men and women, regardless if there was separate seating.

Shwekey issued a response that he had already posed the question to Rabbi Ovadia Yosef when an earlier concert featuring him, along with Mordechai Ben David, was also banned. Rabbi Yosef responded that there is absolutely no prohibition as long as the event had completely separate seating. Neither Shwekey nor Fried pulled out of the concert.

Shwekey supports his family through his albums, performances at Jewish weddings, and concerts. He also performs at fundraisers for charitable organizations.

He and his wife Jenine and their five children live in Deal, New Jersey. Jenine is the co-founder of the Special Children’s Center in Lakewood, New Jersey, a respite and support program for special needs children, and Shwekey also volunteers much time and energy to this philanthropic endeavor. In an interview with Yated Ne’eman, Shwekey said, “I’m convinced that the success I’ve experienced in my music career is all because of our work with these special children”. 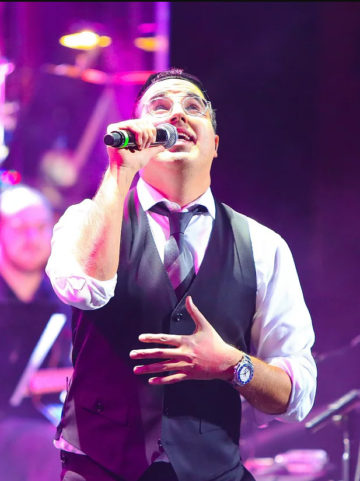