Shua Kessin began displaying his musical talents at a very young age. As a child, Shua played on the family piano. From age 3, he began fiddling around on the keyboard as well, figuring out how to play songs and chords by ear. He composed his first song at age 6 and has been singing ever since.

In Camp Naarim, as a youngster, Shua put his musical talent on display, singing solos in choirs, acting and singing in plays on stage, and singing solos during color war.
At the age of 11, Shua had mastered the keyboard, and began playing at events such as sheva brachos and bar mitzvahs. By his teenage years, Shua was composing songs and singing in public.
While Shua continued to excel in his learning and yiras Shomayim, he utilized his musical talents as a healthy outlet. As a tenth grader, Shua acquired a special interest and appreciation for the music of Shlomo Carlebach, listening to his professional recordings, stories and nusach. During those years in mesivta, Shua would often daven for the amud, mesmerizing his listeners with his koach hatefillah and koach haneginah. His heartfelt singing and understanding of music made him a superb baal tefillah and baal menagein.

Shua then began playing guitar, and in twelfth grade mastered the instrument after studying from music books and by playing on his own. Shua began composing songs on the guitar and leading kumzitz gatherings on a regular basis.

At age 20, Shua became acquainted with Yisroel Travis of Toronto, a well-known aficionado of Shlomo Carelbach’s music who released an album titled “The Hidden Songs of Shlomo Carlebach”. Shua was flown to Toronto to perform at his first concert, together with Yisroel Travis. Shua sang and played guitar and amazed the large crowd at the event. Prior to Purim that year, Shua put on a second concert and began leading many kumzitz gatherings in private homes in Toronto. That year, Shua was flown to Florida for two kumzitzen and to lead the davening at a shul there on Pesach.
At age 20, Shua went to Eretz Yisroel to learn. While there, Shua met many people in the music business and was in high demand to sing in choirs on albums and to lead kumzitzen all over the country. Shua also sang at many weddings in Eretz Yisroel. At the same time, Shua met Dan Hendrickson, a renowned vocal teacher in Israel, and began taking voice lessons.
That summer, and during two subsequent summers, Shua ran the entertainment and musical program of Rabbi Paysach J. Krohn’s tour through Eastern and Central Europe. Shua capably kept the large tour group entertained and uplifted throughout the trips.

Since the age of 15, Shua has been “collecting” Shlomo Carlebach songs, searching and analyzing many of Shlomo’s songs that have never been recorded. Shua has since become one of the world’s biggest mavens of Shlomo’s music, amassing a musical knowledge of Carlebach unrivaled by anyone he’s met.
After returning to the United States, Shua continued performing at weddings, bar mitzvahs and concerts among other events, and gained renown as a tremendous singer and performer. In addition to traveling around the country and to Canada to perform, Shua performed Shabbos weekend events, Yom tov & Chol Hamoid events and concerts, sang for multiple organizations for cholim, and performed at hotels and at events for special and ill children.

Shua continued his vocal training with Cantor Nosson Glick, and continued composing songs. Shua also trained by Cantor Aron Weingarten & Cantor Hersh Einhorn. At his wedding in March 2006, Shua distributed a CD with his hit song, “Im Atah Maamin”,which he has since performed hundreds of times. Shortly thereafter, Shua met Ozer Babad, who became his manager and began booking events for him. Shua performed at weddings and other events with Neginah Orchestra, Neshoma Orchestra and others. Shua also began booking and leading his own orchestra for different occasions.
Shua’s meteoric rise in the world of Jewish music as one of the most sought after singers is no surprise for those who have followed his career and witnessed his unparalleled musical talent.
Shua gained wide recognition for his performance at a Motzoei Shabbos Nachamu concert in Monticello Raceway with a number of musical stars, including Yaakov Shwekey and others. During the summer of 2007, when Avraham Fried canceled a performance at Camp HASC, Shua ably filled in, putting on an inspiring performance.
On Sukkos 2007, Shua performed at a concert in Brooklyn College with Avraham Fried and has performed there & other major stages multiple times since then, with many other performers including MBD and others.

Shua as well, added harmonica to his repertoire, and played the instrument, as well as guitar, at concerts and events, wowing the thousands in attendance with his versatility and range.
The composer of now, hundreds of songs, Shua has continued his musical exploits by embarking on a project to produce his first debut solo album titled Lo Lihityaeish (2009). The album was a smashing hit and sold thousands worldwide. His songs have received high praise from some of the best known Jewish music composers and arrangers, including Yossi Green and Yisroel Lamm. In 2013 Shua created and performed at the first ever live online webcast kumzitz event which brought in more then 60,000 viewers in the 2 hour time frame of the event. He has since then repeated it twice more with the same outcome.

Continuing to perform at regular music events, Shua then when on to become a RN (2013) and currently works in the ED & OR aside for performing music.
Currently (2015), aside for the regular events that Shua performs at, he also when on to create a unique all acoustic band called Harmonics (www.HarmonicsBand.com). He balances his time between working as a RN and performing with them at many upscale events, aside for the regular events he does as well.
Shua’s outgoing personality and keen acumen makes him the perfect performer. He knows how to size up his crowd and perform accordingly. His ability to inspire and get a crowd to sing and participate has made him a unique asset to the world of Jewish music. His energy and hartz are matched only by his likability, sweetness, range and diverse knowledge of music. Whether it’s a Chassidishe, Litvishe, Sefardishe or more contemporary crowd, Shua has shown an ability to adapt and put on a performance enjoyed by all. And his ability to connect & energize a live crowd, be it in his singing or telling stories, is a facet of Shua’s musical ability that thousands have found entertaining and stimulating.
While music is a central part of Shua’s life, he is first and foremost a ben Torah and one who spends much time learning. He’s finished numerous mesechtos in Shas and continues to devote himself to limud haTorah.

When not performing across the United States, Canada and elsewhere around the globe, Shua, his wife Chayala, and their 3 sons and 2 daughters make their home in Jackson, New Jersey. 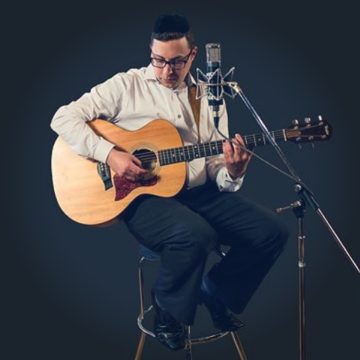