Shlock Rock is a Jewish Rock Band that teaches Jewish ideas through music using song parodies, original music in both English and Hebrew and children’s songs. Lenny Solomon started the ball rolling in 1986 and since then the band has released more than 30 amazing albums! Our mission is to encourage Jewish pride, identity and awareness and help promote Jewish continuity through music. Shlock Rock has performed over 2,000 shows in the United States , Canada , Australia , South Africa , Israel and England .

Educators in both formal and informal settings have used the music to spark discussions and activities and the results speak for themselves. To this day there are inspirational stories that are emerging testifying to the fact that Shlock Rock songs have helped both individuals and Jewish families get closer to their heritage!

History In A Nutshell

Shlock Rock has gone where no Jewish bands have gone before: Trivial Pursuit, Imus in the Morning, Newsweek, The Wall Street Journal, and Entertainment Tonite. Most important of all, Shlock Rock has gone straight to the hearts of Jewish families everywhere. But how did it start?”

Shlock Rock was born in the middle of the night. In December 1985, Lenny and the band rented the 39th Street Music studio in New York for two weeks from midnight to 8:00am. It was the only time slot they could afford in a studio which was home to some of the stars of the music scene. Top musicians joined the sessions and Learning is Good was released in January 1986.
It took Shlock Rock Learning is Good nine months to become the hottest selling album in the Catskills. For the second album Steve Bill, a guitarist and arranger who had appeared on over 200 Jewish albums and countless mainstream recordings became Shlock Rock’s producer. He would do more than fourteen projects and even has had a hand in the production of the latest release Shlock Rock No Limits!

After their initial success, Lenny wrote 11 more parodies and in February 1987 Purim Torah was released. At around the same time the Jewish Public School Youth Movement (JPSY) asked Lenny to arrange and produce an album. The result was Jewish Pride, a collection of original English and Hebrew songs which was released in March 1987.

In December 1987 the original Shlock Rock Band consisting of Lenny Solomon on keyboard, Gary Wallin on drums, Mark Skier on bass, and Mark Infield on percussion set out on a series of live performances. Danny Block on saxophone joined the group in March 1988.

The band has changed over the years but the contribution of these original Shlock Rockers is duly noted in the Shlock Rock Hall of Fame. 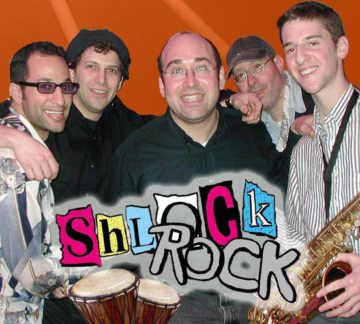