Shalsheles first introduced itself to the Jewish music scene in 1999. Shalsheles is a vocal musical group singing its own original compositions. The group consists of the composer Yitzchok Rosenthal, Baruch Aryeh, Chaim Block, and Simcha Sussman.

Shalsheles’ goal is to produce an updated musical sound, while remaining connected to the soul of Jewish Music and its past via a “chain,” hence the name Shalsheles – meaning a chain or link within a Dynasty, the Dynasty being Jewish Music.

To date, Shalsheles has produced five albums, a single entitled Dreaming, and was heavily involved in a third album entitled Rozoh D’Shabbos (the songs were composed by Yitzchok Rosenthal). They have performed in select concerts throughout the world.

The members of the group look upon Shalsheles as a hobby, one in which they hope to positively influence Jewish Music. Shalsheles would like to thank all of its fans and supporters for all the positive feedback and encouragement that they received throughout the years . It is because of this that they hope, G-d willing, to continue in their efforts on behalf of Jewish Music. 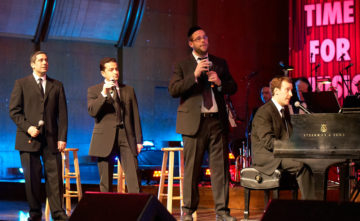