Adam was born in the United States, when he was three years old. He moved to live with his family in Mishmar Hashiva, where he lived until 2017. His father, Major Yaniv Adam, served as the deputy commander of the Paratroopers’ , Whose origins are Caucasian on the father’s side and Ashkenazi on the mother’s side, are among other senior officers, among them Omar’s grandfather – colonel and lieutenant Shmuel Adam, and generals Yekutiel Adam and his son Udi Adam. Another relative is Yekutiel Ravayev, who fell in defense of Petah Tikva as the guard of the colony in 1916.

Adam served in Training Base 20 as a soldier in the Ordnance Corps.

In 2005, he participated in the song competition “Shir Born”, singing alongside Tal Mosseri the song “Wonder Child”.
Career

Participation in Kochav Nolad and the first album

Adam attended the seventh season of the program “A Star Is Born”. During the season, blogger Omri Hayoun revealed that a person falsified his age in the registration process and declared that he was 16, even though he was only 15 years old, less than the minimum age defined in the regulations. Following the exposure, he announced his retirement from the plan.

Later that year, he released a debut single called “Lost in the Wind”, after which he released the single “Do not Cry.” At the end of July, he released another single, “Contract in the Soul,” which was the theme song of “The Wedding of the Year” program on Channel 2. In August of that year he released the song “Hoppe” To the song of the Greek singer Georgios Alkaios performed in the Eurovision 2010 (the name of the song in Greek: παα), and in December 2010 he released his first album “Melting from You,” which included his singles and other songs, You will not know a tear. ” In addition, the album included remix versions of some of the songs.
2011-2012: A good boy in the body of a bad boy

In 2011, about two months after the release of his album, he released his first single, “Happy,” which was included in the collection project “One Strong Black Sugar.” On June 15, 2011, he performed for the first time in front of an audience of thousands of people at the Caesarea Theater and became the youngest singer to perform in Caesarea (age 17 and 8 months).

On January 22, 2012, Adam released the single “Do not Look.” The song was included in his album “Good Boy Bad Boy,” which was released on January 29. Out of it were also published songs “happy” and “built on you.” Later that year, he participated alongside his personal agent Assaf Atadgi in the docu-reality series “The Agents.”
2013: Music and silence

In June 2013, Adam participated in the official activity of the gay pride week in Tel Aviv and performed the song “Tel Aviv”, the main song that accompanied the gay pride parade in Tel Aviv and the events around it. Adam was a guest singer at the Gay Pride Parade event and generated positive responses. In 2013 he also released the album “Music and Quiet”. Won the silver button award from YouTube that year.
2014-2015: I admit

In 2015 he sang the theme song of the series “Zagury Imperia” written by Maor Zaguri.

Performed the song “Singer of the Three Answers” by Rivka Zohar, which was revived in the past by Zehava Ben in a new version in which, unlike the previous versions, the man does everything for the woman and not the other way around.

On May 29, 2015, the singer released the song “Bucharest” written by Doron Medley.

On December 8, 2015, a joint album was released together with Moshe Peretz for their joint show “Revolution”.
2016-Present: After all the years

On January 31, 2016, Adam released the song “After All Years” as a single. The song was a great success in Israel: the song was over 16 million views on YouTube, came first place in the charts of Network C and the mid-way radio, and the second place of the Media Forrest.

On February 16, 2016, Adam published the song “Fields of Excuses” as a single. As of November 2016, the song has won more than 8 million views on YouTube. The song received good reviews from one side and less favorable reviews on the other.

On August 8, 2016, four songs were leaked from Adam’s future and sixth albums. The first is the song “An Old Story,” a duet of a man with Liran Danino. On September 10, 2016, the official song was posted on YouTube. The third is, “No one is sitting here.” On October 31, his poem Isabelle was leaked out for an unknown bat mitzvah. On November 19, 2016, he released his fourth song from the new album, “Politics and Sex,” written and composed by Uri Ben-Ari. “Old Story” reached 11th place in Galgalatz’s annual parade for the year 5771.

On February 13, 2017 he released the album after all the years. In February 2017 he published the song “Looking from the Side”, which reached the 18th place in Galgalatz’s annual parade for the year 5777 and 17th place in the annual Gimel network parade on March 26, 2017. In June, the single “Paradise”, written by Doron Medley and composed by Doron Medley and Yinon Yahel, was released in June, and in July the single “Once in a Lifetime” was written by Elad Trabelsi and was composed and worked by Asaf Tzruya, the single reached the sixth place in Galgalatz’s annual parade for the year. In the same month he also released the song “At the End of Everything Passage” which reached 4th place in the same parade.

On Hanukkah in 2017 he participated in the Festigal, this time called “Story Festigal” alongside Lee Biran, Daniel Gad, Shira Levi, Mickey Kam and others. Due to the fact that he is observing the Sabbath, for the first time in the history of the festival there were no performances on the Sabbath.

In October 2017 it was reported that Adam was chosen to be the local presenter of the Spanish fashion brand “Mango”. 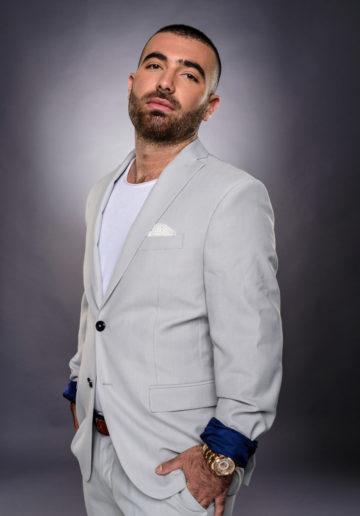