Moshe Mordechai (Mona) Rosenblum is a composer, conductor, arranger and producer of chassidic music, and is considered today to be one of the oldest and most important professionals in the field. He is also the winner of the ACUM Lifetime Achievement Award.

Rosenblum was born and raised in Ramat Gan to a family from Poland whose roots are in the Gur Hassidim. As a young man, he studied at Nachalim Yeshiva, together with his uncle, Dudu Fisher. From an early age he was involved in music, at the age of five and a half he learned to play piano, guitar and wind instruments. While in high school he turned to a musical career. At the age of 17, he arranged and conducted the choir of Nachal Nachal Stream Yeshiva. His greatest breakthrough was in the 1970s when he conducted the Pirchei Jerusalem Choir and produced their first album.

Rosenblum is the producer and arranger of several Hasidic music singers, including Mordechai Ben David, Lipa Shmeltzer, and Shloime Cohen, the Miami Boys Choir. He also produces the discs of Yermiya Damian, a singer and composer in Belz Hasidism.

Mona is also a composer and his songs are performed by Hasidic singers, some of them known hits, such as the song “Messiah” by Mordechai Ben David, the song “Moriah” by Avraham Fried, the song “Master of the World” Mordechai Ben David, the song “Ashreichm” which he performed at the Mann Auditorium in March 2005 and the song “Because there is Torah in the Torah” which he performed at Teddy Stadium in July 2012. He also produced the song “You Are Revealed” on the occasion of the end of Shas, A series of tapes of songs composed by singers such as Avraham Fried, Mordechai Ben David, Lipa Shmeltzer and Shlomo Cohen. In addition, Rosenblum produces a series of discs called “Philharmona,” in which he processes various songs performed by various singers, and includes several new songs, but he himself does not serve as a singer, but on the “Mona 4” “The founders of poor soil” composed by Ephraim.

Until the late 1980s, Rosenblum belonged to the national-religious public, but later approached the ultra-Orthodox public. He is close to Chabad Hasidism, as well as to Gur Hasidism, to which he also produces the discs that are published each year for the High Holy Days.

Rosenblum is also a conductor, and performs at large events accompanied by his orchestra. From the 1990s until 2012 he was the conductor and musical director of the military rabbinate band. On the 60th Independence Day of the State of Israel, he composed and composed an original song written by Yael Haramati and performed by members of the Rabbinate Choir in the World Bible Contest – “Sixty Years.” He also conducted the orchestra at the Siyum Hashas in recent years. In 2010 he was chosen as one of ACUM’s Lifetime Achievement Award winners.

Since the 1990s, Rosenblum has been presenting the Kabbalat Shabbat program on religious radio stations – first on Channel Seven, then on Kol Kol Hai radio and now on Radio Kol Barama. He also edited the section “Jewish Play” in the Hamodia newspaper. 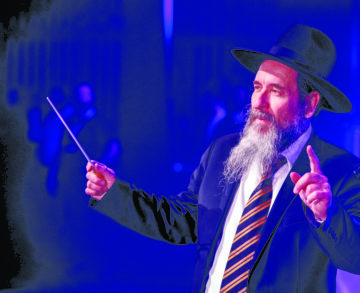