There are singers who became famous from singing as child soloists, singers who had family members help fund an album and even those who were discovered and produced by big producers. However very few, if any, made it their life mission to sing and bring simcha to people because a Rebbe told him to. It was back in early 1991 when a young Mendy Jerufi was ushered into the office of the world renowned Lubavitch Rebbe, Menachem Mendel Schneerson zt”l. Every Sunday, the Rebbe stood there for hours and handed out dollar bills for tzedakah (charity) use to thousands of faithful Jews who flocked to him from around the globe. Many anecdotes are told about this special place, and myriad stories are shared. Stories that took place in that narrow corridor between the elevator and the Rebbe’s office door in Brooklyn. And so it happened: A slender young man in his late teens slowly approached the holy Rebbe with great awe, awaiting his moment to receive a dollar. Menachem Mendel Jerufi´s eyes met the penetrating gaze of the Rebbe. And at that moment, something very special, in fact almost magical, happened. “Marbin B’simcha/We increase our joy,” the Rebbe declared. This young man, who had yet to sing professionally, was astonished by the unusual blessing he’d just received. Typically the Rebbe said ‘Bracha v’Hatzlacha’ (‘blessing’ and ‘success’) when giving out dollars. Mendy quickly sought clarification of this special blessing, by asking those close to the Rebbe for an interpretation – to no avail.

“I began to analyze what the Rebbe meant by his blessing and came to the conclusion that he wanted me to use my voice to bring others joy,” says Mendy. “While I’d enjoyed singing in the company of friends and family, it never occurred to me to be a professional singer. Only after I completed my yeshiva studies and got married did I begin to pursue a career of making others happy with song.”

Mendy first broke onto the music scene with his debut single titled Eretz Asher Tamid, which was played on local radio networks and soon became a hit. Shortly thereafter, Mendy cut his first album with the same title under the “Gal Paz” label, which propelled him onto the world scene as a Chassidic singer. A circle of listeners and fans grew steadily, and invitations to perform at concerts in various Jewish communities worldwide poured in. He sang and danced himself into the hearts of his audiences – and continues doing so.

His second album, produced by Eli Yechieli and titled “Veyadata Hayom,” found itself quickly topping the Jewish music charts. In 2002, Mendi took first place at the Chassidic Song Festival at the Mann Auditorium in Tel Aviv. Accompanied by a full orchestra of 80 musicians, and conducted by Mordechai Sobol, thousands of listeners were treated to the song Neginot Nenagen.

Later that year, Mendy was set to perform at the annual Kinnus Hashluchim in Crown Heights. He arrived in NY on Thursday and over Shabbos realized that he lost his voice. On Sunday he went to the Ohel of the Rebbe to daven that his voice return so that he could perform that evening. Well, his tefillos must have been answered, because his voice returned by 5 pm that day and he was able to perform at the kinnus that night.

Today, Mendy works closely with many top Chassidic musicians and countless Jewish singers and musicians. It’s not uncommon to see him on stage performing with the biggest names in Jewish music. He went on to release the album Merakdin which has produced several chart-topping hits, and its single Merakdin is now a staple at weddings. Veteran Jewish music producers Moshe & Eli Laufer, as well as Yuval Stoppel, have infused authentic Chassidic melody with a fresh twist in Mendi’s music.

Two years ago, Jerufi released his latest album Hayom Hu Yavo which featured twelve stunning tracks and some unique arrangements that help him stay on top of the music world around the globe.

Over the years Mendy has works with batei Chabad around the world and performs for them worldwide including Brazil, US, Europe and abroad. In Israel he is very busy B”H singing at weddings, simchos and concerts. He works with everyone, not just Chassidic but Mizrachi, litvishe etc.

Recently Mendy released a book which is made from a collection of poems/Torah thoughts on the topic of simcha from the Rebbe titled “Marbim B’simcha.” This way every single day if you are looking for point of Simcha, it will be available for you. Jerufi wasn’t just working as a singer to be mechaven to the Rebbe, but also with his book he is looking for ways to spread Simcha. 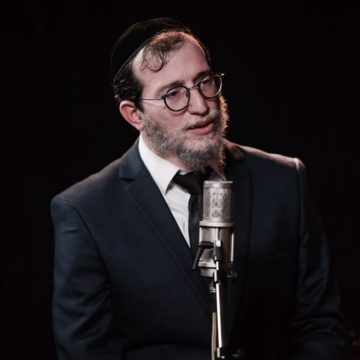