The “Kinderlach” Group was founded in 2005 by musician Yishai Lapidot and producer David Fadida. The Group, which upon its foundation was defined as “Israel’s new kids group”, has managed to startle the Jewish and Israeli music realm both in Israel and overseas and, within a short time, has become the new sensation in all media broadcasts and captivated their audiences.
“Kinderlach” was given a very broad media coverage and was dubbed in the front-page article of the prestigious “Sheva Yamim” supplement of “Yedioth Ahronoth” as “the greatest and freshest musical surprise in Jewish music”.

The kids that make-up the group, who have been trained by the best professionals in Israel, have managed in a very short time to conquer the stages of Jewish music around the world , and have among others performed before the Jewish communities of Mexico, South Africa, the USA and Europe.
The Group’s debut album was released at the beginning of 2006, and has to-date been sold in more than 60,000 copies in Israel and around the world.
Israel’s National Television Station, Channel 1, has lately broadcasted a fascinating documentary about the Group members.
The Group frequently performs in the Jewish communities around the world 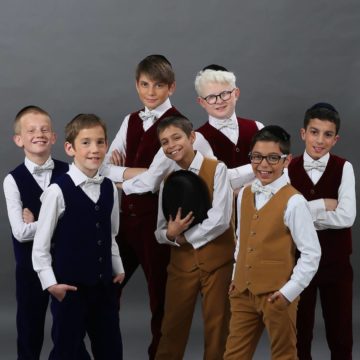