Carolyn Davidson came up with a design half a century ago which has developed into one of the most recognized logos today. The “swoosh” which represents Nike has become the company’s trademark and this checkmark symbol is known worldwide. As every company has its unique symbol or emblem, each industry has its pioneer/frontrunner who represents that industry. The name Gideon Levine has become synonymous with Jewish music, as he remains a figurehead, and is symbolic of the industry, even today.

Born in Jerusalem 1959, Gideon always had a passion for music, and he attributes this to the fact that he grew up in a very musically-minded family. At the age of 11 he received his first clarinet as a birthday present from his grandmother; a gift he will never forget! He learned very quickly, practicing every chance he got, and within a short period of time his hard work paid off. As a young teenager, Gideon performed at local simchas, and private events, with a friend who played the accordion. Together they offered a new sound, slightly off the ‘beaten’ path. Audiences gravitated towards this new type of music.

The young duo began traveling the country, gaining a stellar reputation, with rising popularity. After five years of playing the circuit, Gideon recruited a few more musicians to play exclusively with his band. Within a short period of time, this new creation began dominating the wedding scene, all over Israel. Gideon Levine followed up his band’s tremendous success with a solo debut album entitled Chomesh Yerushalayim featuring his own compositions, written as early as the age of 12. The album quickly became a huge hit in Israel and a new A-list artist/celebrity was born!

In the summer of 1981, Gideon went on to release Shomer Yisroel, his second solo album, which was distributed internationally. A short time later, Gideon came to the United States and settled in Brooklyn, NY. At first he was taken by surprise when he realized the music industry was completely different here in the States. He began working in local recording studios, where he got his first glimpse of what really goes on behind the scenes. Gideon was fascinated with what he saw, the operations of large scale studios, and it became a dream of his to one day man his own.

A self-taught engineer, Gideon found his niche and nothing was stopping him now, he was determined to turn his dream into a reality. Gideon went to audio shows and even eavesdropped on studio sessions in order to gain greater insight into the field. Since he didn’t have money at the time to construct a full studio, he started off by buying basic equipment, and grew it from there. Gideon slowly but steadily built up a demo-studio out of his home in Brooklyn. After recording hit singles like “Daaga Minayin” and “Od Yeshvu” with childhood friend MBD, Gideon’s career was in cruise control. He went on to record multiple Reggesh albums with Abish Brodt, Mendy Werdyger’s Welcome Back Yom Tov, as well as a follow up solo album entitled Kol Berama (A Voice in Heaven).

While winter of 1988 may have been one of the coldest New York has ever seen, Gideon brought some warmth when he announced the grand opening of the brand new GYL Studios! The first of its kind, Gideon offered a state of the art, high end recording studio at the most reasonable rates. Prior to GYL Studios, many artists would record abroad to cut costs. Gideon now developed a new home for artists across the global spectrum to come and conquer a production from start to finish with no middle man involved. GYL Studios has recorded over 300 records to date. The studio is notoriously known for its “generational microphone,” which has been used by artists/musicians for almost three decades, spanning from superstar names such as David Werdyger, Shlomo Carlebach, Avraham Fried, Yaron Gershovsky, Yisroel Lamm, Dedi, Shloime Dachs, Lipa, and Yaakov Shwekey. Gideon proudly describes the mic as “a historic piece of Judaica.”

Gideon himself has written nearly 250 songs to date. He often envisioned specific artists while crafting certain tracks. One day the idea dawned upon him to bring it all together and release a “unity” album featuring his own compositions with arrangements by Ruvi Banet, starring a plethora of Gideon’s musical acquaintances. Best of the Best hit stores in early 2000 and instantly became a household favorite. This was the first record to feature such an extensive cast and fuse so many styles/genres together. Gideon followed up the legendary album with a sequel. This time around, Gideon himself sang along with the selected vocalists. To no one’s surprise, the second volume was received just as well.

Gideon’s latest musical endeavor was a team effort between Heshy Rubin and Srully Williger. Mizumen was an attempt at a modern day “Rabbi’s Sons” with a humorous flare. Heshy first brought the idea, along with all the material, to Gideon, to produce and record, and then asked him to join them on the album. Mizumen was a best seller, topping the charts nationwide.

Gideon is not solely a producer, composer, arranger, and studio engineer extraordinaire but rather an innovator in many facets of the market. He had the original idea of releasing compact discs and is even responsible for introducing the concept of a backup choir to the industry. Gideon is truly a glowing example of how far one can go when he taps into his potential. His sense of commitment and perseverance led him down the path of success. Gideon Levine has certainly made his mark on Jewish Music history. 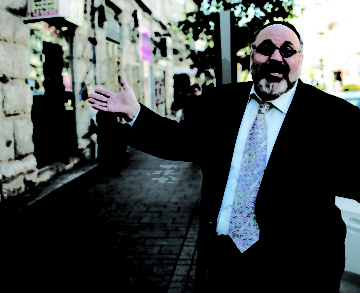