Recently the Jewish people, in particular the music industry, suffered a terrible loss with the passing of one of the last links to the previous era of Jewish music, the great Reb Ben Zion Shenker zt”l. He was regarded as perhaps the leading composer of chasidic melodies, whose music influenced not only chassidim, but even popular klezmer bands.

During his lifetime, Rabbi Shenker had composed over 500 melodies, and they have been recorded not just by him, but also by other musicians, including Cantor Yitzchok Meir Helfgot, violinist Itzhak Perlman, Andy Statman, the klezmer clarinetist and bluegrass mandolinist; and even the Israel Philharmonic Orchestra.

The year was 1925 when Ben Zion Shenker was born in Brooklyn just four short years after his parents emigrated from Poland. From childhood, he was enchanted by the singing of cantors like the great Yossele Rosenblatt, whom he heard on his parents’ phonograph. At the young age of 12 he joined a choir conducted by a prominent cantor, Joshua Samuel Weisser, who featured him as a soloist on a Yiddish-language radio program.

By the time he reached 14, he began studying composition and music theory, but his musical path was determined shortly after that, when he encountered Rabbi Shaul Yedidya Elazar Taub, the Rebbe of Modzitz. Rabbi Taub had escaped from Nazi-occupied Poland and made his way to Brooklyn in 1940. Virtually every Rebbe in the Modzitz dynastic line composed music, and Rabbi Taub was said to have written a thousand niggunim.

Once, on a visit to his house, the young Rabbi Shenker picked up a book of sheet music containing some of the Rebbe’s compositions and quietly hummed the melodies. Since few chasidim were trained musicians, the surprised Rebbe asked, “You can read notes?” When Rabbi Shenker said he could, the Rebbe asked him to sing the melodies out loud and was so taken with his talents that he asked him to be his musical secretary.

Soon he was composing his own melodies and, with his reedy tenor, singing songs beloved by the kehilla for their tenderness, gracefulness and fervor. In 1956, he established his own label, Neginah, to record his first album of Modzitz melodies. He was backed on it by a Modzitzer Choral Ensemble in a program of music composed for the zemiros of Melave Malke. It was one of the first collections of religious melodies by an ultra-Orthodox musician, and it prompted other chassidic dynasties to record their own melodies.

He eventually produced nine more records of Modzitzer music, including his own compositions. Rabbi Shenker sometimes conceived his melodies sitting at a piano with a siddur in front of him, and sometimes while learning from a sefer on the subway. But he earned most of his living in business, first in a family-owned sweater company and afterwards as a partner in a small diamond business on West 47th Street in Manhattan.

Anyone who wanted to sample Rabbi Shenker’s works could go to the Modzitzer shul in Midwood. For more than five decades he led tefillos there, including those that were shaped by his melodies. And when he walked home on a Friday evening, he could hear his melody for “Eishes Chayil” sung in almost every Jewish home in his neighborhood.

Among his most widely heard compositions are the melodies for “Mizmor L’Dovid,” and his “Yosis Olayich,” which is still played at most weddings around the world today.
Andy Statman, who had worked and collaborated with Reb Ben Zion on his last few albums, was involved in a new recording days before Reb Ben Zion’s passing. Rabbi Ben Zion Shenker was a supremely musical person, and had a keen understanding of how to sing a melody, color it and ornament it just so. 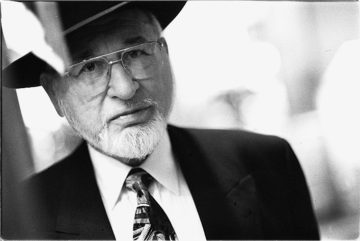